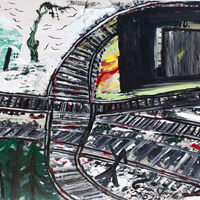 Ceija Stojka is born in 1933 in Kraubath, Styria (Austria). She is the fifth child of Karl Wackar Horvath and Maria Sidonie Rigo Stojka. In accordance with Romani law, the children take their mother’s family name. The Stojkas are from a line of horse traders, the Lovara, who came to Austria in two main waves of migration : from Hungary and Slovakia in the second part of the 19th century and, from Hungary again in 1956. Deported in March 1943 with her mother and her siblings at the age of nine, Ceija Stojka survives three concentration camps: Auschwitz-Birkenau, Ravensbrück, Bergen-Belsen. She is liberated on the 15th of April 1945.
At the age of fifty-five she breaks her silence and undertakes an extraordinary journey back into her memories. The result are several books of testimony and over a thousand works in ink, gouache and acrylic, on canvas and on paper : the remarkable achievements of an autodidact.
Stojka was the first Romani woman in Austria to bear witness of the camps and to speak out against denial and forgetting, against the anti-Romani racism pervasive in Austria and Europe.
The ensemble she left at her death in 2013 is like a giant journal in which paintings and writings combine to evoke the nightmarish experience of a child who lived through the Porajmos/Samudaripen, the Romani genocide.