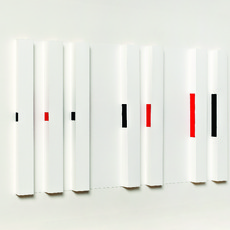 Argentinean artist César Paternosto is a painter, sculptor, and theorist. At the beginning of the 1960s he embraced abstraction at a time in which painting was still the cutting-edge art. It was in New York in 1969, however, that he conceived a radical “lateral vision” of painting that brought the pictorial notations to the side edges of the picture. Toward the end of the 1970s an encounter with the ancient arts of the Americas led him to pursue systematic research on the eccentric origins of abstraction in non-European cultures, about which he later wrote and published one book.