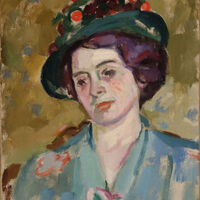 Charles Camoin entered the Beaux-Arts in Paris in 1896 in the studio of Gustave Moreau, where he became friends with Matisse, Marquet and Manguin. They would be participating together at the "Cage aux Fauves" at the Salon d'Automne of 1905.

However, Camoin never fully adhered to the fauvist revolution: "If I was a fauve, it's because I painted that way, I had the same exclusive love for the color that I have for my friends. But I was never concerned about theories and principles. I was unintentionally fauve... I'm driven by my instincts."

Camoin was a big admirer of Cézanne whom he met in 1901. Camoin probably remains the most "Impressionist of the Fauves" in Bernard Dorival's words. The relationship they had would determine for a long time the originality of Camoin's art, which tended to reconcile the spontaneity of the gesture colored with the arrangement of the motif.

After the war, Camoin divided his time between his studio in Montmartre and Saint-Tropez, where he settled in 1921, claiming more and more his taste for a sensual painting, voluptuous and spontaneous. He was influenced by the presence of Renoir, whom he visited in 1918 along with Matisse.