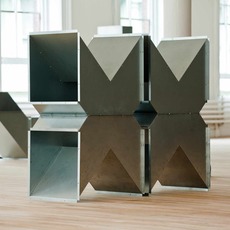 Charlotte Posenenske is a pioneering sculptor whose artistic contributions have been lasting and far-reaching. Posenenske became inspired by the American Minimalism movement during visits to New York in the early 1960s and developed a penchant for industrial materials and processes. She displayed her works in highly democratic ways, allowing her sculptures to be rearranged to fit different spaces. This revolutionary approach introduces ideas of variability and cooperation, forging an exceptional connection between Minimalist art and participatory practices. In 1968, Posenenske left the art world and worked as a sociologist specialising in labour relations until her death. Several posthumous exhibitions of Posenenske’s career have been mounted, including a major touring retrospective currently on view at Dia:Beacon, New York.