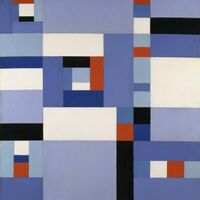 Von Wiegand was born in Chicago in 1896, grew up in Arizona and California, attended a public school in San Francisco (where she initially became interested in Chinese culture when visiting Chinatown), and lived for three years in Berlin as a teenager. Then she attended Barnard College for a year and then transferred to Columbia University School of Journalism where she studied Journalism, before transferring to the Department of Art and Archeology. Later, she studied at New York University in New York City with Richard Offner. In college, she explored Theater, Archaeology, Greek, Philosophy and Art History. Nevertheless, she did not complete her bachelor's degree and thought she might become a playwright. Soon after college, von Wiegand married and moved to Darien, Connecticut.
Von Wiegand's first of more than 21 solo exhibitions was at the Rose Fried Gallery in New York, 1942. She participated in 35 major group exhibitions in the United States, Europe and Far East, including Peggy Guggenheim's 1945 Women's Show at the Art of this Century Gallery in New York. She received the first prize at Cranbook Academy of Art Religious Art Exhibition, Bloomfield Hills Michigan (1969). In 1980, she was elected to the American Academy of Arts and Letters. In 1974, Weigand had a retrospective showing of her work at the Noah Goldowsky Gallery in New York.[6] In 1982, she organized her first retrospective at the Bass Museum of Art in Miami Beach, Florida. In the same year, she received an Honor Award and was exhibited in the Honor Award Exhibition at the National Women's Caucus for Art Conference in New York. Her work is still represented in more than 25 museums and permanent collections including the Andre Zarre Gallery, Michael Rosenfeld Gallery and the Solomon R. Guggenheim Museum, all in Manhattan, New York, the Cleveland Museum of Art in Ohio, the Hirshhorn Museum and Sculpture Garden in Washington, D.C., the Newark Museum in New Jersey, and the Museum of Modern Art, NYC.