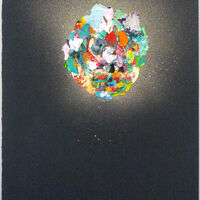 Chris Duncan is an Oakland-based artist who employs repetition and accumulation as a basis for experiments in visual and sound based media. An overriding theme in current works is the use of natural forces, such as the sun and the moon, as conceptual and compositional prompts for both sonic and visual efforts. Outside of his studio practice he organizes events and runs a small artist book press and record label called LAND AND SEA with his wife. Duncan earned his BFA from the California College of Arts and Crafts and his Masters Degree in Art Practice from Stanford University.

He is represented by Halsey Mckay Gallery.