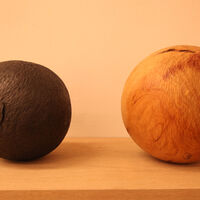 Claire de Santa Coloma (*1983, Buenos Aires, Argentina) studied direct carving sculptures at Ateliers Beaux-Arts de la Ville de Paris as well as Visual Arts Research at the Sorbonne. Between 2007 and 2009 she was artist in residence at Casa de Velásquez in Madrid, followed by the Independent Studies program at MAUMAUS in Lisbon from 2009 to 2010. In 2017 she won the EDP Foundation New Artists Award. She currently lives and works in Sydney, Australia.

Claire de Santa Coloma’s primary medium is sculpture, created from wood she finds or was given which she elaborately carves by hand. Her objects appear simultaneously natural and abstract. Sensitively evoking iconic forms—alluding to classical modernism and its reincarnations in mid-century design—the artist engenders an uncanny familiarity with her works. Sensual and enticing to the touch and staged as precise, spatial installations, they raise fundamental sculptural issues, in particular the relationship to the viewer and explore new modes of experiencing sculpture.