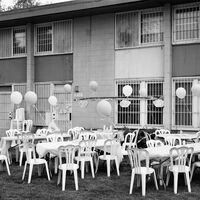 Dana Lixenberg (1964, Amsterdam) lives and works in New York and Amsterdam. She studied
Photography at the London College of Printing in London (1984-1986) and at the Gerrit Rietveld
Academie in Amsterdam (1987-1989). She has gained international fame through her work for
publications such as Vibe, New York Times Magazine, The New Yorker, Newsweek and Rolling
Stone. Her work has been widely exhibited and can be found in prominent international
collections.
Decisive in Lixenberg's career was her Imperial Courts series, beginning in 1993 and continuing
until the spring of 2015. In 1993 Lixenberg was awarded a project grant by the Fonds BKVB
(The Netherlands Foundation for Visual Arts, Design and Architecture) for a series of portraits at
the Imperial Courts Housing Project in Los Angeles. All the while Lixenberg continuously worked on long-term personal projects, mostly focused on individuals and communities on the margins of society, such as
Jeffersonville, Indiana, a collection of landscapes and portraits of the small town’s homeless
population, and The Last Days of Shishmaref, which documents an Inupiaq community on an
eroding island of the coast of Alaska. The power of her work arises in the intimacy and the
absence of social stereotyping.