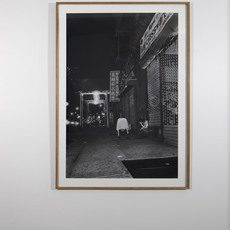 View all works
Career highlights
Group show at a major institution
New Museum, and 4 more
Reviewed by a major art publication
Artforum, and 1 more
Included in a major biennial
Whitney Biennial
See all past shows and fair booths
Bio
Submitted by Morán Morán

Dash Snow was active during a distinct chapter in American history, the early aughts, as an artist in New York at the epicenter of a whole country’s anxiety. Snow spoke for himself and on his own terms, but he also spoke of and to a generation emerging out of a post-9/11 reality. His work articulates his reaction to this politically charged and socially paranoid time, recording his own unadulterated vision of his chosen existence. He let loose a multitude of images during his short life, all honestly reflective of his microcosm as he captured who and what surrounded him, especially his close friends who became his family, while also creating imagery that was broad and pointed, satirizing the rhetoric of authority and the absurdity of tabloid media.