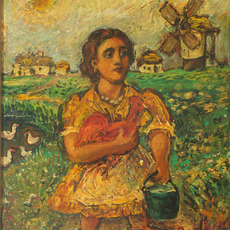 David Burliuk was a Ukrainian painter known for his involvement with Russian Futurism during the 1910s. Burliuk’s thickly painted depictions of Russian peasants in a primitive style are among his most acclaimed works. Born David Davidovich Burliuk on July 21, 1882 in Semyrotivka, Russian Empire (present-day Ukraine), he went on study art at a number of schools, including the Kazan School of Fine Arts and as a private student of Anton Ažbe in Munich. During the early part of his career, Burliuk’s art was a mix of Fauvist, Cubist, and Futurist styles, which he combined with his fascination for the forms and designs of Scythian culture. In 1913, the artist participated in a group exhibition with his friend Wassily Kandinsky for his Der Blaue Reiter almanac. At the outbreak of World War I, the artist fled to Siberia then Japan before relocating to New York in 1922. The artist died on January 15, 1957 in Long Island, NY. Today, Burliuk’s works are held in the collections of the Art Institute of Chicago, the Smithsonian American Art Museum in Washington, D.C., and the State Russian Museum in St. Petersburg, among others.