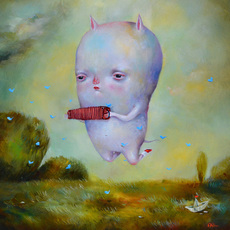 Dilka Bear is a Italian based artist, illustrator and painter. She studied Architecture at the Almaty University of Arts, in Kazakhstan. After working as an illustrator and a graphic designer for companies such as Cosmopolitan Kazakhstan, Grey Central Asia, Saatchi & Saatchi Kazakhstan, she devoted herself to painting. In 2005 she moved to Trieste, since some years she is now resident in Slovenia. Influenced by the great masters of the past, such as Bruegel and Bosch, the Italian Renaissance, but also by contemporary artists such as Marion Peck and Ray Caesar, and by Grimms’ Fairy Tales, Dilka Bear mainly paints with oil & acrylics on table and “creates beautiful […] illustrations of young girls and their frank expressions that mirrors the worlds around them”.