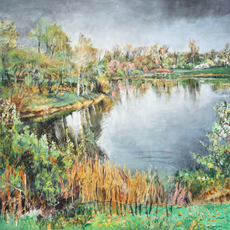 One of Canada’s most respected artists, Dorothy Knowles was born in Unity, Saskatchewan in 1927 and grew up on a farm overlooking a prairie valley. Initially Knowles had no plans to become a painter, and studied biology at the University of Saskatchewan in Saskatoon.

At the time of her graduation in 1948, a friend persuaded her to enrol in a six-week summer course given by the University of Saskatchewan at Emma Lake. The course was led by artist Reta Cowley from Saskatoon and James Frederick Finley from the Ontario College of Art. Under their guidance, young Dorothy found her talent for art.

Upon her return to Saskatoon, Knowles continued to study painting under Eli Bornstein and Nicholas Bjelejac at the University of Saskatchewan between 1948 and 1952. While taking a summer class at the Banff School in 1952, she decided to study art in England, eventually enrolling in the Goldsmith School of Art in London. She was influenced by the National Gallery, where she particularly admired the works of Piero di Cosimo, Piero della Francesca, Veronese, Ucello, and Renoir.
She married artist William Perehudoff in Paris in 1951, then travelled around Italy and France, exploring the great museums and cathedrals of Europe before returning to Saskatchewan in 1952.
They would eventually have three daughters, Rebecca, Catherine and Carol. Rebecca and Catherine are both landscape artists, and Carol, a writer, also has an Masters in Visual Art.

In the 1960s, Dorothy Knowles attended workshops at the Emma Lake Art Camp led by the American art critic Clement Greenberg (1962), artist Kenneth Noland (1963), Jules Olitski (1964), Lawrence Alloway (1965), and Michael Steiner (1969). All of these workshops had varying degrees of influence on her work, changing her style from a heavy impasto favoured by Greenberg to a more fluid technique preferred by Noland. Most importantly, she discovered the joy of working directly from nature.