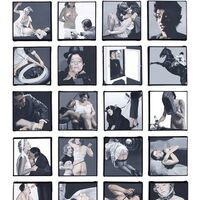 View all works
Career highlights
Group show at a major institution
The Museum of Modern Art (MoMA), and 2 more
Collected by a major institution
Museum of Modern Art (MoMA)
Reviewed by a major art publication
Artforum
Included in a major biennial
Venice Biennale National Pavilion, and 1 more
See all past shows and fair booths
Bio
Submitted by P.P.O.W

Dotty Attie was born in Pennsauken, New Jersey in 1938 and lives and works in New York City. A presence on the New York art scene for over fifty years, Attie is one of the founding members of A.I.R. Gallery, the first all-female cooperative artist’s gallery, founded in 1972. Her work is a fusion of minimalism, appropriation, and feminism and has consistently balanced emotional depth with critical inquiry. Since her earliest exhibitions, Attie’s work has rigorously engaged the grid as a formal and conceptual tool. She decontextualizes canonical works by Old Master painters and Modern photographers, who, not incidentally, are all male. Text panels are interwoven with her drawings or paintings to imbue her images with violence, eroticism and psychological imbalance. She received a BFA from the Philadelphia College of Art (1959), a Beckmann Fellowship at the Brooklyn Museum of Art School, New York (1960) and attended the Art Students League, New York (1967). Attie was awarded a Creative Artists Public Service grant in 1976-1977 from the New York State Council and National Endowment for the Arts grants in 1976 and 1983. In 2013, Attie was inducted into the National Academy of Design. Attie has exhibited nationally and internationally since 1972. Her work is in the collections of Yale University Art Gallery, CT; The Wadsworth Athenaeum, CT; Smith College Museum of Art, MA; The Museum of Modern Art, The Whitney Museum, and the Brooklyn Museum, NY; among others. In 2008, Attie was Included in Burning Down the House: Building a Feminist Art Collection, curated by Mauro Reily and Nicole Caruth, at the Brooklyn Museum of Art, NY. In 2012, Attie was featured in This Will Have Been: Art, Love & Politics in the 1980s, curated by Helen Molesworth, at the Museum of Contemporary Art, Chicago, IL; the Institute of Contemporary Art, Boston, MA and The Walker Art Center, Minneapolis, MN.