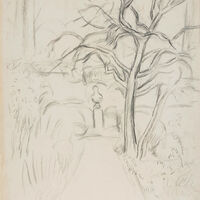 Duncan Grant, born in 1885, was a British painter and member of artist/intellectual collective the Bloomsbury Group. He was particularly influenced by fellow member and esteemed art critic Roger Fry, with whom he worked on several occasions. Grant was well known for his highly developed painting style, though he was also a designer of textiles and carpets. Grant’s painting showed evidence of his artistic schooling, half French – he attended La Palette from 1906-7 – and half British – he returned to London later that year to spend a term at the Slade. His work was well received, exhibiting work at the Venice Biennale in 1926 and 1932. A major retrospective was held at the Tate Gallery in 1959 and again in 1975. Grant died 3 years later.