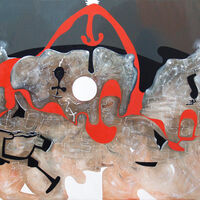 Eduardo Arranz-Bravo was born on October 9, 1941 in Barcelona. In 1951 he studies at the Institute Menéndez y Pelayo Barcelona where is suspended by the art teacher, who is convinced that Arranz-Bravo copies every homework he presents.

From 1959 to 1960 Arranz-Bravo studies art in Barcelona at the School of Fine Art of San Jorge.

He had his first solo exhibition in 1961 at the University Club of Barcelona, but it wouldn't be until next year when he earned the critics' acclamation at a show organized by the Ateneo de Barcelona.

Also during this decade, the artist is initiated in sculpture and begins a series of drawings with Joan Ponç.

His early works belong to informalism, movement that he leaves in 1961. Since then his art is mixed by surrealism and the aesthetics of pop art. Since 1980 his previous fragmented style gives way to a loose brushstroke graphism which continues today with works full of colors, especially with tonalities in red and with little figures, mainly zodiac signs or crosses.

Some of his most representative works meet in the series "Abrazos" (Embraces) of 1983 and "Pantocrator" from 1986-1989. His work is shown in the Spanish National Museum of Contemporary Art Reina Sofia in Madrid, the Contemporary Art Museum of New York, the Sao Paulo's Museum and the Fine Art Museum of Vitoria among many others.