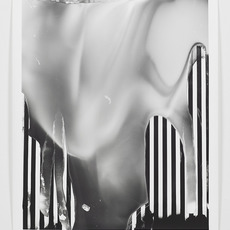 Eileen Quinlan (born 1972, Boston) is an internationally known American artist exploring the material boundaries of the photographic process and its personal and conceptual implications. She often collaborates and exhibits with a close community of artists, including her husband, Cheyney Thompson and friends, Tanyth Berkeley, Walead Beshty, Liz Deschenes, Sara Greenberger Rafferty, Matt Keegan, Lucy McKenzie, Blake Rayne, and Sara VanDerBeek. Quinlan often begins her work with still-life and studio photography, and subjects the images further darkroom and material manipulation. Her works oscillate between abstract and representational, suggesting that the lens-based process is indiscriminate in its capacity to capture, while at the same time acknowledging the often intimate and personal implications of Quinlan’s practice. Quinlan begins each series (each image, in fact) with a polaroid which serve as the basis from which further decisions are derived. Quinlan earned a BFA from School of the Museum of Fine Arts, Boston in 1996 and a MFA from Columbia University in 2005 and lives and works in New York. Her first solo museum survey at ICA Boston in 2009 was followed by group exhibitions New Photography curated by Roxana Marcoci at MoMA (2013), What Is a Photograph? curated by Carol Squiers at ICP (2014), Outside the Lines: Rites of Spring at CAM, Houston (2014). A survey of polaroid works dating from 2005 to 2017 entitled Too Much was shown at Miguel Abreu Gallery in 2018. Quinlan’s work is in many private and museum collections, including the Metropolitan Museum of Art, the Whitney Museum of American Art, The Museum of Modern Art, the Solomon R. Guggenheim Museum, LACMA, Los Angeles MOCA, UCLA Hammer Museum, the Ackland Museum, among others. OSMOS Books also published a book surveying Quinlan’s use of polaroid film from 2006 to 2017 entitled “Good Enough,” edited by Cay Sophie Rabinowitz.