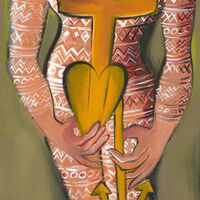 In a neo-expressive manner Elvira Bach creates a reflection of her life. Inspired through her life Berlin, influenced from travels and her family environment, she developed an unmistakable visual language between symbolism and expression.

In the eighties she became known as a representative of the “Jungen Wilden”, and in 1982, at the very beginning of her career and as the first female artist ever, she was invited exhibit at "Documenta" in Kassel. This was followed by shows all over the world and the addition of her works to permanent collections in renown museums such as the Modern Museum of Art in New York.