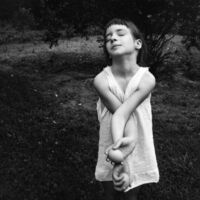 Emmet Gowin (b. 1941, Danville, Va.) received a BFA in Graphic Design from the Richmond Professional Institute (now Virginia Commonwealth University) in 1965 and an MFA in Photography from the Rhode Island School of Design in 1967.

While at RISD, Gowin studied with photographer Harry Callahan who became one of his mentors and greatest influences. Following his marriage to Edith Morris in 1964, Gowin began making memorable portraits of her as well as of his family members. In addition to his work in portraiture, Gowin has explored landscape and aerial photography since the 1980s, documenting sites in the Czech Republic, Mexico, the Middle East, Japan, and the United States. A recent series addresses the global impact of pivot irrigation, natural resource mining, and military occupation and weapons testing on the environment.