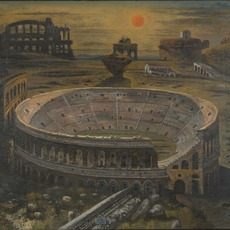 Eugene Berman was born in St. Petersburg, Russia on November 4, 1899. He studied under P.S. Naumov and S. Grusenberg. The stepson of a rich St. Petersburg banker, Berman was left homeless at eighteen by the Russian Revolution. He fled with his family to Paris in 1918. There he studied under Vuillard, Denis and Vallotton. He became acquainted with another alien, Pablo Picasso, eighteen years older than Berman. By that time, restless "Papa" Picasso was gaining notoriety as a cubist; but Berman, along with his brother Leonid, and his friends Tchelitchew and Berard, thought cubism something to avoid. Their idea was to go on from where Picasso's Blue Period left off - to paint, in a traditional way, the cracked shells of European civilization. They were the "Neo-Romantics". Berman painted dreamlike scenes of mournful, drooping figures and he gained an international reputation for his imaginary romantic landscapes.

In 1935, Berman came to the United States. For a while, he painted murals for fashionable houses, covers for Vogue and Town and Country. Then he settled in Hollywood. He was a bald, plump, cheerful little man whose paintings were meticulously composed glimpses of ruin, misery and decay. His work fairly groans with heartache. Berman died December 15, 1972.