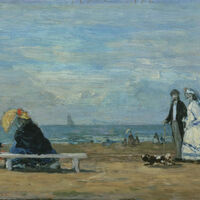 View all works
Career highlights
Group show at a major institution
The Museum of Modern Art (MoMA), and 1 more
Collected by a major institution
National Gallery of Art, Washington, D.C.
Included in a major biennial
Venice Biennale National Pavilion, and 1 more
See all past shows and fair booths
Bio
Submitted by Stoppenbach & Delestre

Eugène Boudin was one of the first plein-air painters known for his depictions of coastal towns, their harbours and beaches, especially in Brittany, Normandy and the Pas-de-Calais. His beach scenes, inspired by a naturalist approach, were infused with light and characterised by an agile, fluid and sketched brushwork, which led to the development of the Impressionist movement.

Born in Honfleur, Boudin was the son of a ship’s captain, and grew up assisting his father at sea, which stimulated his interest for marine subjects. In 1845, whilst managing a stationery and framing shop, the artist met Jean-François Millet, who was living in Le Havre.

Following the advise of Millet and Constant Troyon in 1851, Boudin enrolled in a painting course in Paris. Here, he regularly visited the Louvre and developed a profound interest for Dutch Golden Age painting, whilst also being drawn to the Barbizon painters.
Boudin made his debut at the Salon, in 1859, where Charles Baudelaire and Gustave Courbet admired his work. The artist Jean-Baptiste Corot heralded Boudin as the ‘king of the skies’.

As a result of the artist’s growing reputation, Boudin decided to settle in Paris, while travelling to the coast of Normandy during the summer. Here, on the coast, he found a curiosity for the emerging social class visiting these coastal towns, and thus, was inspired to express this through painting.

It was Boudin who was to become Claude Monet's first teacher, persuading him to paint in the plein-air, since, ‘nature is truly seen in all its variety and freshness’ (Boudin). By 1874, he was invited to participate in the first Impressionist exhibition.

The artist’s works are included in many global museum collections, such as, the National Gallery, London; Musée d’Orsay, Paris; Metropolitan Museum of Art, New York; National Gallery of Art, Washington.