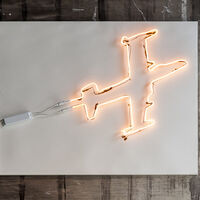 Fiona Banner aka The Vanity Press(b. 1966, Merseyside, UK) was born in Merseyside, and studied at Kingston University, London, and Goldsmiths, the University of London. Banner first gained attention in the mid-1990s for her “wordscapes” and “still films”, which explored the relationships of primitive human desire and violence conveyed by traditional nudes, pornography, and Hollywood war films, relayed as dense verbal descriptions. As her moniker, The Vanity Press suggests, language and publishing are at the heart of Banner’s practice, and her attitude is at once playful and often performative.
Banner was selected as the finalist for The Turner Prize, the prestigious British art award in 2002. She has also been exhibiting her works in solo and group exhibitions at the world's leading art museums and institutions including Tate Britain, Hayward Gallery, Yorkshire Sculpture Park, Whitechapel Gallery, De Pont Museum of Contemporary Art, Walker Art Center, MoMA PS1, MoMA, etc. Banner's work was collected by MoMA, Walker Art Center, The Metropolitan Museum of Art, Philadelphia Museum of Art, Tate Modern, British Council, The Contemporary Art Society, and the National Gallery of Canada.