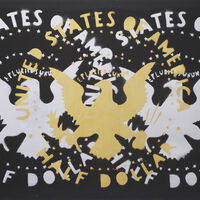 Franco Angeli was born in Rome on 14 May 1935 in Via dei Piceni in the San Lorenzo district. In order to provide for his ailing mother, Angeli began working at the age of nine: first as a warehouse worker, then in a body shop and an upholstery shop, where he learned the use of fabrics, shapes and cuttings, which he would use in his works. Angeli began painting in 1957, the year he left for military service in Orvieto. On his return to Rome in 1955, he came into contact with the sculptor Edgardo Mannucci, whom he frequented until 1957, a friend of Alberto Burri. In 1960 he inaugurated his first solo exhibition at the same "Galleria La Salita" in Rome with a series of works characterised by veils of oil paint and taut nylon stockings covered with gauze. In the same year, again at La Salita, he took part in the collective exhibition '5 pittori. Roma 60: Angeli, Festa, Lo Savio, Schifano, Uncini curated by Pierre Restany. In 1962, he took part in the exhibition "Nuove Prospettive della Pittura Italiana" (New Perspectives in Italian Painting) at the Galleria Comunale d'Arte Moderna in Bologna, where he presented a series of works in which the symbolism of power began to appear. For his solo exhibition at the Galleria dell'Ariete in Milan in January 1964, Angeli used stereotypical ideological symbols taken from street furniture, synthesising the rhetorical and celebratory character of the finds of an eternal and capital Rome. In the same year he took part in the Venice Biennale presented by Maurizio Calvesi, exhibiting the canvases "La Lupa" and "Quarder Dollar". He opened America America (Half Dollar) at the Galleria dell'Ariete, presenting large golden eagles veiled in shades of blue, white and red. In 1978 he took part in the Venice Biennale curated by Achille Bonito Oliva. In his last years he devoted himself to the theme of the 'marionette'. Angeli died in Rome on 12 November 1988.