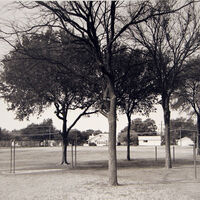 Frank Gohlke was raised in Wichita Falls, Texas. He received a B.A. in English Literature from the University of Texas at Austin in 1964 and an M.A. in English Literature from Yale University in 1966. While at Yale, Gohlke met photographer Walker Evans, and during 1967-68 he studied with landscape photographer Paul Caponigro. Between 1971and 1987, Gohlke lived in Minneapolis, moving to Southborough, Massachusetts, and eventually to Tucson, Arizona where today he is the first Laureate Professor at the University of Arizona School of Art and The Center for Creative Photography. Gohlke is the recipient of many honors awards including two Guggenheim fellowships, two grants from the National Endowment for the Arts, and a Fulbright Research Grant to photograph in Kazakhstan (2013-2014). He has published several books, recently: Frank Gohlke, Joel Sternfeld: Landscape as Longing: Queens, NY (2018); Speeding Trucks and Other Follies (2017); Measure of Emptiness: Grain Elevators in the American Landscape (1992, 2020); Thoughts on Landscape: Frank Gohlke, Collected Writings and Interviews, (2009); Mount Saint Helens: 1981-1990, and Accomodating Nature: The Photography of Frank Gohlke (2007). In 1975, Gohlke was included in the influential exhibition, New Topographics: Photographs of the Man-Altered Landscape, organized by the International Museum of Photography at the George Eastman House. Frank Gohlke’s photographs are in the collections of public institutions such as: The Museum of Modern Art, New York; the Metropolitan Museum of Art, New York; International Museum of Photography at the George Eastman House, Rochester, NY; Art Institute of Chicago; the Canadian Center for Architecture; the Amon Carter Museum, Fort Worth; the Center for Creative Photography, Tucson; and the Walker Art Center, Minneapolis.