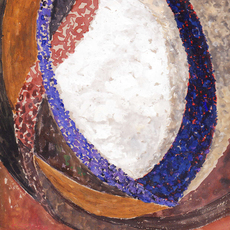 In 1887, Frantisek Kupka began training as an artist at the Praha Academy. In 1891 the artist transfered to the Vienna Academy. In 1894, Kupka travelled to London and Scandinavia, and then settled in Paris in 1895.
Just like Lyonel Feininger and Marcel Duchamp, Frantisek Kupka started off as a caricaturist and draughtsman. He made fashion designs, drafts for posters, illustrations for books and various satirical magazines.

In 1905, Kupka moved to Puteaux where he met Jacques Villon, who introduced him to a circle of painters in 1910-1911, including Marcel Duchamp, Robert Delaunay, Fernand Léger, Francis Picabia and others. They discussed the problems of form encountered by Cubism and Futurism as well as the connections between painting and music.
Kupka's works fundamentally changed: he became the first artist in France to move from Jugendstil to Abstraction.
The acceptance of the ornament as an independent element led him to the final abandon of the natural form. The group around Villon, called Section d'Or, had its first exhibition at the Salon d’Automne in 1912. Frantisek Kupka exhibited his abstract paintings there, associated with Orphism because of their proximity to music.

In 1918, he became a teacher in Praha and in 1931 he co-founded the Abstraction-Création group with Hans Arp, Jean Hélion, Auguste Herbin, Georges Valmier and Georges Vantongerloo.
That time was also marked by important exhibitions at the Jeu de Paume museum in Paris.
Frantisek Kupka spent the Second World War in Beaugency, returning to Puteaux immediately after the Liberation.
In 1946, at the occasion of his 75th birthday the artist's first major retrospective occurred in Praha. In 1955, he participated in "documenta I" in Kassel.
Kupka died in Puteaux on July 21th 1957. A year later a large-scale retrospective exhibition took place at the National Museum of Modern Art in Paris, which dedicated an entire room to Frantisek Kupka.