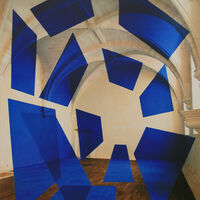 Georges Rousse is an internationally known artist who has always been fond of abandoned places all over the world. He transforms them into pictorial spaces and builds an ephemeral and unique work that only photography can reproduce.
In order to allow the spectators to share his experience of the Espace Georges Rousse, he chose, from his very first exhibitions, at the beginning of the 1980s, to exhibit his images in large format prints. It was with the discovery of Land Art and Malevitch's Black Square on a White Background that Georges Rousse chose to intervene in the photographic field, establishing a new relationship between painting and Space. This strong and singular work, which shifts the boundaries between traditional media, immediately made its mark on the contemporary art scene.
Since then, Georges Rousse has continued to exhibit and intervene throughout the world, in Europe, Asia, the United States, Quebec and Latin America, pursuing his artistic path beyond fashion.