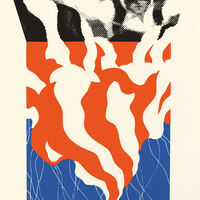 We were greatly privileged to know and work with the legendary Pop artist Gerald Laing.

One of the original wave of Pop artists, and one of the few to cross both the UK and US movements, Laing produced some of the most significant works of the Pop Art movement and holds his rightful place as one of the most important artists of his generation.

In the 60s Laing pioneered large canvases and the newsprint painting style portraying newspaper photographs of astronauts, models and film stars. His 1962 portrait of Brigitte Bardot is considered his most iconic work of the period and regularly features prominently in major Pop museum retrospectives.

Laing first visited New York in 1963, at the end of his first year at St Martins. It was on this occasion that he met his contemporaries, the American Pop artists Warhol, Lichtenstein, Indiana et al, inspiring him to move to New York in 1964. He immediately began exhibiting to great acclaim in New York, Los Angeles and Chicago and his work entered many important private collections as well as museums including the Whitney and MOMA.

Disillusionment with the American dream led Laing to leave New York in 1969 and return to the Highlands of Scotland where he turned his back on painting and focused on an incredible body of sculptural work for the next 30 years. He returned to painting in 2004, using Pop imagery to shame the perpetrators of war crimes at Abu Ghraib, and 2007 saw his return to the contemporary media images that inspired such enduring images as his 1962 Brigitte Bardot. His important Amy Winehouse series once again proved his ability to distil the essence of an era to stunning effect, his painting hiatus seeing him return to the medium as contemporary as he was when he set down his brush at the end of the 60s.

The world sadly lost Laing in November 2011. There are no words to describe how very much he is missed, nor how lucky we all are to have the incredibly important artistic legacy that he leaves us.