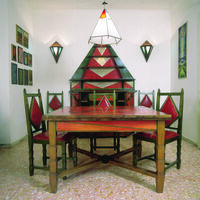 Gerardo Dottori was a major figure of the second wave of the Futurist Movement. He, along with a group of artists, developed aeropainting as a result of the new perspective on the world brought through flight. In Dottorri’s work the landscape was synthesized and harmonized to create utopian lyrical forms reminiscent of his native landscape from above. Around the middle of the 1920s, Dottori achieved the first culmination in his Futurist depictions of the world as seen from the air. Using a splintered, dynamic vocabulary of form he evoked an intoxicating sense of speed. Strong colors, especially red and blue placed against a range of landscape greens, underscored the sense of rapid flight. In 1929, the artist signed the Futurist Aeropainting Manifesto. Dottori’s greatest contribution to Futurist aesthetics was his distinctive interpretation of aeropainting. With their sweeping panoramas and distorted horizons suggesting the curvature of the earth, Dottori’s works exemplify an atmosphere of serenity and lyricism that is unique in Futurist art. In 1941, he wrote his own Umbrian Futurist Aeropainting Manifesto, which called for dense, polycentric, harmonious and spiritual aerial images. Dottori remained faithful to Futurism, even after its decline, and continued to exhibit both in Italy and abroad until his death.