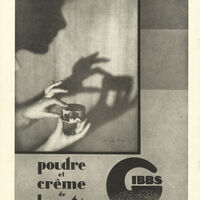 Germaine Krull was born in 1897 in Wilda, Posen (then East Prussia, later Poland). In 1915 Krull studied at Munich's Lehr-und Versuchsanstalt für Photographie and in 1918 passed her examination as "master photographer". In 1922, Germaine Krull moved to Berlin and opened a photo studio with Kurt Hübschmann.

She arrived in Paris in 1926 and became friends with Sonia and Robert Delaunay, Eli Lotar, André Malraux, Colette, Jean Cocteau, André Gide and others. Her commercial work consisted of fashion photography, nudes and portraits.

By 1928 Krull was considered one of the best photographers in Paris, along with André Kertész and Man Ray. During this period she published the portfolio Métal (1928). Krull shot the portfolio's 64 images in Paris, Marseille and Holland. Many of the photographs were taken from dramatic angles, and the work has been compared to that of László Moholy-Nagy and Alexander Rodchenko.

Between 1928 and 1933, her work focused on photojournalism, such as her photos for Vu magazine. She gained international attention with three thematically distinct publications: the portfolio Métal (1928), the book 100 x Paris (1929) and Études de Nu (1931).

Between 1935 and 1946, Krull worked in Monte Carlo; Belem, Brazil; and Brazzaville, French Equatorial Africa. In 1944, Krull returned for the liberation of Paris; she spent the next two years traveling as a war correspondent for the Agence d'Édition et de la Presse before settling in Bangkok, where she would remain for the next 20 years.

Returning to Paris in April 1966, Krull, with the help of André Malraux, was given her first retrospective at the Musée du Cinéma, Palais de Chaillot, Paris, in 1967.