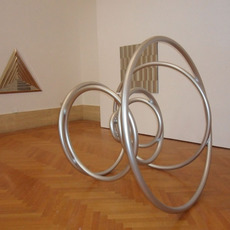 Considered as a representative of Italian Kinetic-Programmed Art of the Sixties, Getulio Alviani was born in Udine in 1939 and died in Milan in 2018.
His first series was "The Wires", inspired by aerial electric wires. Fascinated by some polished aluminium surfaces found in a factory in which he was working: after further polishing and abrasion, he created his landmark "Superfici a testura vibratile" (vibrating texture surfaces), winning international acclaim. In 1961 he was invited to the Zagreb exhibition "Nove Tendencije", together with other artists working along similar lines and exploring the opportunities of a dynamic art which interacts with the viewer. He started exchanging ideas with artists like Julio Le Parc, François Morellet and Enrico Castellani, actively participating in the activities of the so-called G.R.A.V. (Groupe de Recherche d'Art Visuelle) in Paris.
In 1962 he moved to Milan, where he became friends with Piero Manzoni and Lucio Fontana, who was very interested in his works and bought some of his "surfaces". He also worked with other famous artists like Max Bill, Bruno Munari and Josef Albers. In 1964 he was invited to show at the Venice Biennale, successfully sharing a room with Enrico Castellani.
In 1965 Alviani took part in The Responsive Eye at MoMA in New York, together with other artists associated with Kinetic and Programmed Art. His work was purchased by MoMA and used as a poster image for the museum's next exhibition, "The New Acquisitions". In 1968 he was invited at Kassel's Documenta 4.
Throughout the 1970s he travelled to South America, and accepted, upon request of Jesús Rafael Soto, the directorship of the Jesús Soto Museum