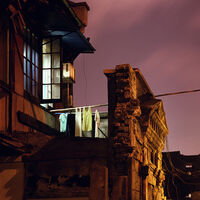 Greg Girard is a respected Canadian photographer, whose work has examined the social and physical transformations in Asia's largest cities for over 30 years. He co-authored with Ian Lambot of the seminal book “City of Darkness”, the definitive record Hong Kong’s infamous Kowloon Walled City, and its updated re-release “City of Darkness Revisited”. Other titles include “Phantom Shanghai” listed as one of the top 10 photography books of all time by The Independent (UK), “Hanoi Calling” and, earlier this year, “Under Vancouver 1972-1982” and “Hotel Okinawa”.