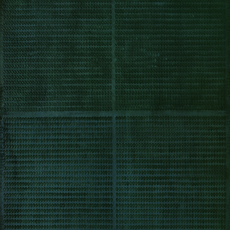 Kim Guiline graduated from Hankuk University of Foreign Studies with degree in French in 1960. After moving to France, Kim studied art history at Dijon University and graduated from Ecole Nationale des Beauz-Arts in Paris, where he lives and works to this day. Throughout his 30 year career as an artist, Kim has consistently pursued the idea of flatness. While he showed tendency to objectify pure black and white flat paintings in the 70s, Kim improved flat monochrome works which consist of small squares and egg-shaped dots as basic units within rectangular canvas in the 80s. Reaching 1990s, Kim used bright primary colors to present works that affirmed the dualistic relationship.

The colors—white, gray and black—that form Kim’s work are commonly known as achromatic colors. However, for Kim, the achromatic colors are not confined to its physical conditions—difference in brightness but without color and purity—but contain equivocal meaning of appearance and disappearance as logical conclusion to all colors in that they come to fade and ultimately disappear as result of passing time. And rather than limited to achromatic colors, it should be seen as characteristic of the color itself.