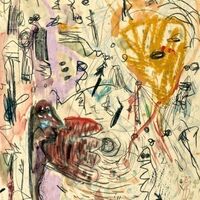 The Austrian painter born in 1958 in Steyr, Upper Austria, and studied from 1978 to 1985 at the Academy of Fine Arts in Vienna. He got famous in the context of the "Neue Wilde" in the 1980s. Gunter Damisch lives and works in Vienna and Freydegg. He is one of the most internationally important representatives of Austrian contemporary art. His thick, relief-like application of color, the intense colors as well as the special forms make his manner of painting distinctive. Next to his large-sized oil paintings he also worked on drawings, graphics, sometimes also sculptures. Since 1992 Gunter Damisch had a professorship at the Academy of Fine Arts in Vienna. In May 2016 he died in Vienna.