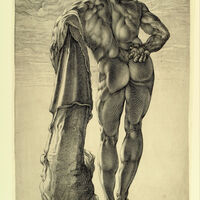 Hendrick Goltzius (1558–1617), engraver, print publisher, draftsman, and painter, was one of the outstanding figures in Dutch art during the late sixteenth and early seventeenth centuries. Goltzius was internationally acclaimed in his day; his enthusiastic patrons included sovereigns from all parts of Europe, most notably the art-loving Holy Roman Emperor Rudolf II. One of the most important engravers and print publishers of his time, he is most widely known today for the Mannerist engravings that he and his workshop produced during the period between 1585 and 1589. This work represents, however, only a fraction of his entire oeuvre, which includes some 500 drawings and about 50 paintings, in addition to some 160 individual prints and series of prints that he and his workshop produced.