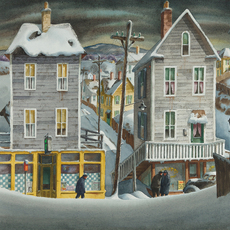 Henry Gasser with sketchbook in hand, walking the city streets of Newark, New Jersey, was not an unfamiliar sight during the middle of the 20th century. Born and raised in the city, Gasser enjoyed a successful career as first a student and then later as an artist, teacher and writer from its commercial center. He received his early training at the Newark School of Fine and Industrial Art and then went on study at the Grand Central School of Art and the Art Students League in nearby New York. There he worked under the guidance of Robert Brackman and the influential Ashcan School painter John Grabach.