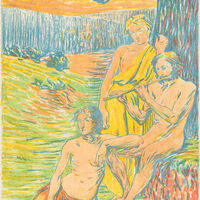 Hippolyte Petitjean, a Neo-Impressionist, Pointillist painter, began his artistic training in Mâcon at the age of thirteen. In 1872, a bursary enabled him to study at the École des Beaux-Arts in Paris under Alexandre Cabanel (1823-89). The paintings he produced throughout this period reflect the high regard he held for the work of Pierre Puvis de Chavannes (1824-98).

Petitjean was artistically inspired by his close friendship with the artist Georges Seurat (1859-91), whom he first met in 1884. By this time, Seurat had endeavoured to study theories of perception and colour. During which, he laid the foundations for the development of Divisionism, a satellite group affiliated with Neo-Impressionism. Often called Pointillism – though Seurat himself rejected the term – the style drew on colour theories proposed by Michel-Eugène Chevreul. Petitjean became an enthusiastic advocate of Divisionism and adopted the technique in 1886.

He turned increasingly to allegorical subjects, though a series of decorative landscape watercolours produced in the years 1910-1912, marked his return to Neo-Impressionism. This is typical of the career long inclinations Petitjean acted upon, in oscillating between Neo-Impressionism and more academic work influenced by Puvis de Chavannes. His reconcilation of modern and traditional painting can be seen via his considered and carefully rendered landscapes, whereby his subjects do not rely on allegorical or mythological allusion.

Petitjean’s palette was remarkable for its colouristic vibrancy; he applied dabs of paint with rapid, small brushstokes. Though loose, allowing the paper to show through, this network of tiny, tightly juxtaposed dabs of colour gave the effect of layering. The illusion of alternating tints heightens the colouristic richness and brightness of Petitjean’s scenes. The result obtained from this Neo-Impressionist technique, is a unique 'coloured light' which enhances the liveliness of these compositions.