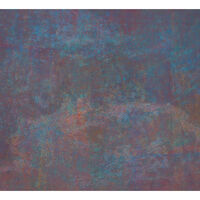 Working across figuration, abstraction and conceptualism, Howardena Pindell has since the 1970s examined a wide range of subject matter, from the personal and diaristic to the social and political. Hers is a complex and nuanced body of work, a fusion of sensuality and intellectual enquiry in which texture, colour, structure and process are employed to mine history (and hidden histories) and address intersecting issues such as racism, feminism, violence and exploitation.

Pindell is known for employing unconventional materials such as glitter, talcum powder, even perfume, in her work and for rendering visible traces of labour, such as obsessively affixed dots of pigment and paper circles made with a hole punch, or canvases cut into strips and sewn back together, which signify wider, metaphorical processes of deconstruction and reconstruction.

Trailblazing early works include Video Drawings, shown in the inaugural exhibition at P.S. 1 Contemporary Art Center in Queens, which led to a long series of works that feature her drawings superimposed over sporting events, news broadcasts and televised elections; and Free, White and 21, 1980, a video in which the artist plays herself and, wearing a mask, a white woman, whose conversation relays Pindell’s own experiences of racism. Her ravishing, pointillist paintings of the 1970s, created by spraying paint through a template, prefigure what is now regarded as her signature aesthetic, in which colourful paper circles are meticulously affixed to unstretched canvases.

Pindell’s achievements as an artist are equalled by her role as a curator, educator and activist. She was the first black female curator at the Museum of Modern Art, and a co-founder of the pioneering feminist A.I.R. Gallery. In 1979, she began teaching at the State University of New York, Stony Brook, where she remains a professor.