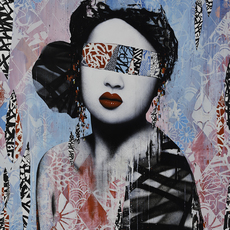 UK based artist Hush draws influence from graphic novels, animation and the evanescent quality of street art. Hush's mix of crazy anime inspired characters and pop-infused imagery creates a fascinating commentary on urban culture and has been described as Urban Abstract Pop. Hush originally trained as a graphic designer and illustrator at Newcastle School of Art andDesign for 5 years. His love of street art goes back to his youth, when he did a bit of graffiti in his formative years and made posters for rave/dance nights, "I've always been interested in how graffiti was being reintroduced and how it was influencing styles and fonts, but never really being accepted as its own art form". Now street art continues to influence his gallery work. On the streets, Hush has noted, "people are going over each other's work adding to the work, this is also true of the art world,you're adding something to the environment and the environment adds something to the piece". Hush has worked throughout Asia, Europe and the USA. His interest and immersion in diverse cultures has informed his art which is recognisable for its cross-cultural influences. His central focus is the female form, in particular iconic and Pop Art renditions, from the geisha to anime manga. Exploring figurative elements, he confronts and examines "the power, innocence, beauty and cunning of feminine sexuality". In an interview Hush explained, "The female form is art, and I always like to convey the power of the female form and how the presence of a woman can influence". He is also interested in the contrasts between old and new and the fusion of Eastern and Western culture. Hush's technique combines various street art approaches with traditional art practices. Absorbing influences from his extensive travels, he has found a striking connection with the mark making, tagging and graffiti he has encountered. His canvases mimic city walls once adorned with layers of wheat pasted images, tags and painting.