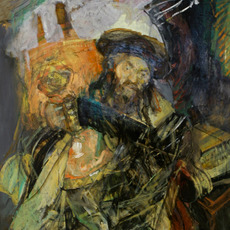 Hyman Bloom was described by Jackson Pollock and Willem deKooning as “the first Abstract Expressionist artist in America.” The Pulitzer Prize-winning critic Sebastian Smee wrote in 2009 that Bloom is “widely regarded as the most significant painter Boston has produced in the last sixty years.” He continued, “His art, at its best, combines visceral power with a striving, speculative, swarming quality that does suggest a visionary sensibility, and feels unique."
Born in Latvia, Bloom emigrated to Boston as a young child. His formal studies in art began in his early teens, alongside his lifelong friend Jack Levine. In his early 30s, Bloom was included in Americans 1942 at the Museum of Modern Art. In 1950 he was selected to represent the U.S. at the Venice Biennale (along with deKooning, Pollock and others). Subsequent museum shows included the Worcester Museum of Art, the Jewish Museum and his first retrospective at the Institute of Contemporary Art, Boston (traveling to the Albright Art Gallery, the M.H. De Young Museum and the Whitney Museum).
The act of revelation was an ongoing process for Bloom. Starting with his early depictions of synagogical rituals and rabbis, seances and cadavers, he explored ways to give visual witness to the life cycle of the spirit. Like Francis Bacon, with whom he exhibited in a two-person show at UCLA in 1960, the body (and its parts) was a vehicle for expressing a deeper emotional or spiritual state. Bloom once said that “the message of the painting is to be seen in the hidden side. You must see their reality, things are not to be imitated but revealed.”