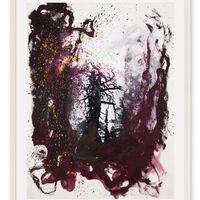 British artist and Royal academician, Ian McKeever, is internationally renowned for his remarkable works on canvas, painted in layers over many months. After receiving the prestigious DAAD scholarship to live and work in Berlin, a major retrospective exhibition of his work was held at the Whitechapel Gallery in London in 1990.

The work of Ian McKeever exemplifies the evolution and merging of photography and art into a highly individual art form. In the 1970s McKeever was a member of Space Studios, an artist-led collective initiated by Bridget Riley and Peter Sedgely. His early works involved placing paintings directly into landscape locations and these site-specific installations were then documented as photographs. McKeever continued to seek a dialogue with painting as a viable pursuit. He travelled extensively, engaging with other cultures recording his journeys through both media, always harnessing the inherent tension between the two. From the 1970s to the 1990s he continued to set one against the other, eventually allowing them to merge and combine. In 2010 he presented the first of a series of Artist Laboratory exhibitions at the Royal Academy. Analogue photographs were transformed into expressively abstracted images, which suggest a sense of reality and place.

McKeever’s most recent series ‘…and the sky dreamt it was the sea’ began in 2015. These works are part gouache, part silver gelatin print, referring back to McKeever’s continuous body of work based on the coalescence of photography and painting.