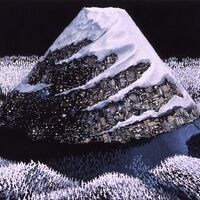 Ikeda Manabu (b. 1973) was born in Saga, Japan and received his master’s degree from Tokyo National University of Fine Arts and Music in 2000. Since his graduation piece for graduate school, he has been consistently working on paper with pen and ink. Using a thin nib, Ikeda weaves elements of civilization and nature into fantastic narratives, which emanate a sense of pure curiosity and abundant imagination. His drawings are so alarmingly dense that he can only manage one fist-sized area per day. However, with indefatigable patience, entire scenes gradually pile up, with the steady, inexorable accumulation of diary entries. Accumulated details in his work become not just a sprawling painting in miniature, but rather a micro and macro world at the same time. This unique duality stems from his architectural point of view and profound affinity for construction. Ikeda received critical attention from American audiences following his participation in the exhibition Bye Bye Kitty!!! Between Heaven and Hell in Contemporary Japanese Art, at the Japan Society in New York City in 2011. He is currently residing in Madison, Wisconsin where he recently completed a multi-year residency at the Chazen Museum of Art, University of Wisconsin-Madison.