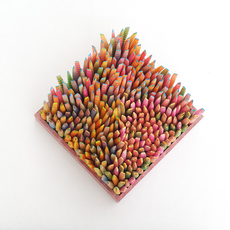 Ilhwa Kim (b. 1967) creates three-dimensional macrocosms composed of tens of thousands of paper "seeds," each representing its own tiny microcosmic universe. Inspired by the Cheonhado, a seventeenth-century world map from the period of the Korean Chosun Dynasty, the wavy surfaces of Kim's Seed Universe and Space Sample series suggest topographic aerial views of a universe activated with energy. Each unique seed is formed through a process of hand dying thousands of hanji paper, which are then cut and rolled into layers, before being arranged in rhythmic patterns of vibrant colors. Kim's labor-intensive practice forms a personal bond between the artist and the individual seeds, imbuing each microcosmic unit with the mark of its creator.