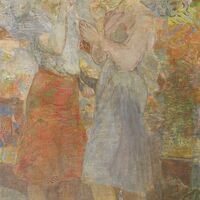 Born in Cincinnati, Ohio, Isabel Bishop was a leading painter and printmaker in New York City during the early and middle part of the 20th century. Her subject matter was urban life of common people in lower Manhattan, where she showed great sensitivity to individuals and their personalities. Along with Reginald Marsh and the Soyer brothers, Bishop was an outstanding realist when Abstract Expressionism was the all-prevalent style. She spent her childhood in Detroit, Michigan, and in 1918, at age sixteen, went to New York to study illustration at the New York School of Applied Design for Women. She attended the Art Students League where Kenneth Hayes Miller and Guy Pene du Bois became major influences. Hayes inspired her to turn to the street life of New York for subject matter and insisted on fine draftsmanship. DuBois made her aware of character and personality differences. In 1925, she turned to etching, beginning with nude studies and then turning to vignettes of everyday life. For many years she had a studio on Union Square at 14th Street, and the Square provided her with much human activity subject matter. She shared a subject interest with Reginald Marsh, and she traveled with him and Kenneth Hayes Miller in Europe in 1931 to study the Old Masters. In 1938, she worked as a Muralist for the W.P.A., and did a mural for the U.S. Post Office in New Lexington, Ohio, and also illustrated the Jane Austen novel Pride and Prejudice in 1946. She was an elected Member of the National Academy of Design, a Life Member of the National Academy of Design, and had representation in New York with the Midtown Gallery.