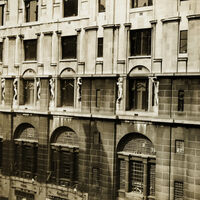 Epstein was born in 1880, the son of Polish Jewish refugees in New York’s Lower East Side. He moved to Paris aged 22 where he studied at the Académie Julian and the École des Beaux-Arts before settling in England and becoming a British citizen in 1911.
In London, Epstein was involved with a bohemian and artistic crowd reflected in his work. His sculpture is distinguished by its unflinching realism – a style which attracted a great deal of controversy for its departure from conventions of classical sculpture. Epstein is said to have worked to his dying day on 21 August 1959. His work is displayed all over the world and helped forge the path for younger generations of sculptors, in particular Henry Moore and Barbara Hepworth.