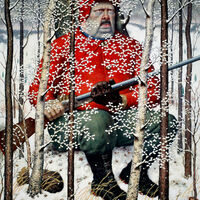 View all works
Career highlights
Group show at a major institution
The Museum of Modern Art (MoMA), and 1 more
Included in a major biennial
Venice Biennale National Pavilion, and 2 more
See all past shows and fair booths
Bio
Submitted by Jarrett McCusker

Born in West Orange, New Jersey, Chapin became known in the 1930s as an "Urban Realist." The young artist first studied at the Cooper Union School of Art and the Art Students League in New York before moving to Belgium to study under Julian de Vriendt at the Royal Academy of Art, Antwerp. Upon his return to America, Chapin exhibited at the Corcoran Gallery of Art, the Pennsylvania Academy of the Fine Arts, and the Museum of Modern Art. During the summer months Chapin would travel to the Southwest and California where he frequently worked with his friend and fellow-artist Millard Sheets.