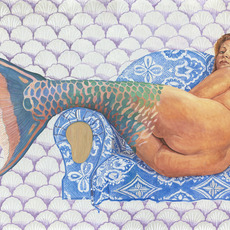 Artist, writer, naturalist, and Yale graduate, James Prosek, was born in 1975 in Easton, Connecticut, where he still resides. A painter and fisherman since childhood, Prosek made his art and publishing debut at the age of 19 with his celebrated first book, Trout: An Illustrated History. Prosek’s work has earned frequent comparison with that of John James Audubon, his earliest influence as a painter. A leading expert on fly fishing, Prosek is the author of several books on the subject, including two for younger readers. He is also emerging as an acclaimed outdoor and travel writer, known for the fresh and passionate quality of his prose. In his fishing and painting, Prosek has traveled widely, often on a grand scale, such as his recent trip around the world along the 41st parallel.

Prosek’s paintings have progressed over the last decade from the naturalistic cataloguing of Trout to more far-ranging subjects: still life, landscapes, and portraits. In spite of the comparison with and influence by Audubon, Prosek has said pure realism has never been his goal. The point of his paintings, he has said, is to express his perception of the natural world.

James Prosek’s paintings have been featured in numerous group exhibitions including The Yale Center for British Art and the Smithsonian American Art Museum, and solo exhibitions including the Philadelphia Museum of Art and the National Academy of Sciences in Washington, DC. Prosek has written for The New York Times and National Geographic Magazine, and won a Peabody Award in 2003 for his documentary about traveling through England in the footsteps of Izaak Walton, the seventeenth-century author of The Compleat Angler. Prosek’s latest book, Ocean Fishes, is a collection of paintings of 35 Atlantic fishes, all of which were painted life size base on individual specimens he traveled to see.