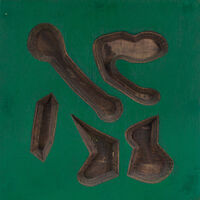 View all works
Career highlights
Reviewed by a major art publication
Artforum, and 1 more
See all past shows and fair booths
Bio
Submitted by CIMA Gallery

Jeram Patel’s (1930–2016) art education between 1950 and 1955 was spread out over Mumbai and England. It included studying design, an aspect which resonated in his work. Jeram’s brush strokes of coiled movements, serpentine, reptilian postures hinted at calligraphic and primordial settings. His strokes were energized and had upward surges, similar to the energy of Ramkinkar Baij’s sculptures. It was this energy which held the form together; the tension prevented it from falling apart. The black ink-masses playing against the white and the various light and dark shades were a new evolution in Patel’s work.