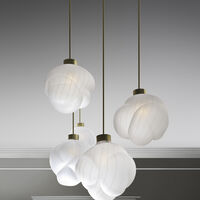 Jeremy Maxwell Wintrebert (born in Paris in 1980 where he lives and works) is an artist Franco-American who has been perfecting glass techniques for more than twenty years the mouth and freehand that he acquired during a cosmopolitan
apprenticeship between the United States and Europe from 1998 to 2007.
That year, he moved to France where he alternates between work in workshops and participation in residencies, workshops and conferences.
In 2015, in the heart of a historic district of Parisian excellence in craftsmanship, he opens his workshop in which he produces all his creations.
In 2019, he opened a second workshop almost adjoining, a real extension of the first.
A clever blend of passion, creativity, know-how and teamwork, within of which the transmission has a decisive place, Jeremy Maxwell's creations Wintrebert are all suffering without a mould.
Elegant, sensual, often colourful and always bright, they combine tradition, modernity, anticipation and remain inhabited by the movement that drew them. These unique pieces reflect, in all their brilliance, the of glass as well as its creative potential and draw on the time of experience and forward-looking inventiveness, developed in a spirit of independence and boldness.
His sculptures have been presented at the Victoria & Albert Museum (Human Nature, London Design Festival,United Kingdom, 2014) and at the Palais de Tokyo
(Revelation, "Toguna", Commissioners Jean de Loisy and Sandra Adam-Couralet, France, 2018). His creations have also been included in the public collections of Mudac (Switzerland), the Kunstsammlungen der Veste Coburg/European Museum of Modern Glass (Germany) and the Glasmuseum Alter Hof Herding, Ernsting Stiftung.
(Germany) as well as many private collections. His work as a sculptor will also be the subject of an important monographic exhibition at the MusVerre (France, 2021).
He is the 2019 winner of the Liliane Bettencourt Foundation's prize for the intelligence of the hand.