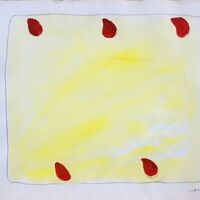 Jiro Yoshihara was born to a wealthy family who owned Yoshihara Oil Mill, a leading edible-oil business. Coming of age before the war, Yoshihara was drawn to modern art and discourse, reading avidly about Post-Impressionism, Cubism, Surrealism and geometric abstraction. In 1928, he studied commerce at the Kwansei Gakuin Commercial College to prepare himself for a role in the family business, but instead became absorbed in painting. He was mostly self-taught, with Yoga artist Shiro Kamiyama eventually serving as a mentor. In 1937, he submitted a number of surrealistic paintings to the annual exhibition of the Nika-kai, the largest artists' organization of yoga of the time, of which he became a full member in 1941. He helped to establish an avant-garde subgroup of Nika-kai, called Kyushitsu-kai, in 1939.

As a gestural and abstract painter, and influential teacher, Yoshihara became one of the most respected figures in post-war Japanese art, contributing to the emerging public and private art associations of the Kansai region, including the Ashiya City Art Association in 1948 and Genbi in 1953. He was also an influential art critic, contributing regularly to journals and national newspapers.

In 1954 Yoshihara founded the Gutai Art Association, a Japanese postwar avant-garde movement, with 16 initial members, which existed until 1972. He was also the driving force behind and editor of the Gutai journal. As the leader of the Gutai group, he conceived, organized, and largely funded its legendary events and is famous for his mandate to create original and innovative art: "Do what has never been done before!". He also led Gutai's essential commitment to internationalism, forging relationships and networks with avant-garde artists, critics, and curators worldwide.