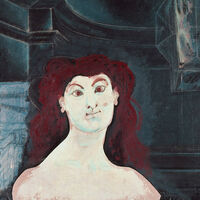 View all works
Career highlights
Group show at a major institution
Whitney Museum of American Art, and 2 more
Reviewed by a major art publication
Artforum, and 1 more
See all past shows and fair booths
Bio
Submitted by Leslie Feely

Russian-born painter, John Graham, came to the United States in 1920 following his service during the Russian Revolution. While attending the Arts Students League in New York, he worked as an assistant to John Sloan, one of the leading members of the Ashcan School of painters. Graham’s work embodies the merging of European avant-garde and American styles, involving elements of Surrealism, Cubism, and eventually leading into the emergence of Abstract Expressionism. He is known for having a variety of different styles, allowing his interest in exploring the psyche to dictate the evolution of his practice. Apart from his role as an artist, Graham put on exhibitions, the most notable being French and American Paintings in 1942 that included artists such as Willem de Kooning, Henri Matisse, and Jackson Pollack. Graham also gained high esteem for his writings on art theory, specifically System and Dialectics of Art from 1937 that became important to the artists involved with the New York School and Abstract Expressionism.