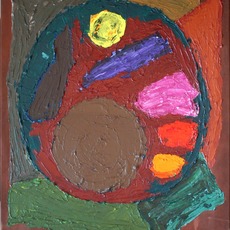 John Hoyland is widely recognised as one of the greatest abstract artists of his time.He trained at Sheffield College of Art and the Royal Academy Schools from. The impressive scale, vibrancy of colour and expressive power that Hoyland achieved with his non-figurative paintings marked him out from his contemporaries and in 1967 he had a pivotal one-man exhibition at the Whitechapel Art Gallery. Hoyland went to live and work in the United States in the late 1960s where he was welcomed into the company of the New York artists. Though sharing their belief of using colour for its own sake, Hoyland did not embrace the American tendency towards minimalism and extreme simplification; instead, he built on the traditions of British and Northern European colouristic expressionism.